The recurring theme from the Governor of the RBA is that interest rates will remain low for some time to come. He continually reiterates this theme through the monetary policy statements and other channels. This is as a result of low global interest rates.

The questions and uncertainty that becomes apparent from here on is at what level does the RBA stop reducing the cash rate and what are the ramifications of having already unprecedented low interest rate levels.

It is probably accurate to deduce that the lower rates are and the closer to zero they move towards and even through zero, the less impact monetary policy has upon stimulating growth and other desired economic conditions.

The objective of quantitative easing is to provide liquidity to deal with financial strains in the market. Different central banks adopted different approaches post GFC, so one hat doesn’t fit all. Challenges of whether to expand QE into the private sector and what particular assets may be eligible are all questions which require some form of address by central banks.

The RBA has repeatedly stated that having negative rates in Australia is very unlikely, but not impossible. It would appear strongly that the RBA will invoke other forms of policy management prior to accepting negative rates. This is where the unconventional policy measures or QE is likely to be adopted. QE on its own, is not a simple and straightforward deployment of flooding the market with liquidity. How this is executed and with which participants to transact with and what asset types, are all decisions that will require thought and maybe adjustment, depending upon local and global economic conditions.

Negative rates are largely concentrated in Europe and with the exception of Japan and on a limited only basis, these policy measures are relatively new to markets.

It also appears that the RBA is also using forward guidance as part of its strategy of managing policy. The observations of negative interest rates are inconclusive as to whether they have achieved the desired effects and outcomes targeted. There is a view that as rates go to and below zero, that monetary policy becomes contractionary and not expansionary.²

We note that Bill Evans of Westpac has sent out a forecast of the cash rate being 0.25% in 2020 and the RBA to engage with QE. As previously stated, if this were to occur, there are quite a few ways which QE could be deployed. We feel that this course of action if required, would almost certainly be adopted prior to the extreme reluctance of the RBA to have negative interest rates.

We are also of the view with an RBA becoming more transparent that the cash rate will move to 0.50% probably in February which will be the most next likely opportunity post December. This is already heavily anticipated with the 30 day interbank cash futures contract indicating a 68% probability.

We assume that a further adjustment of rates will not be contractionary but expansionary. Australia already has a second tier group of property funders that appear to have a sustainable footprint and we see no shortage of capital being both domestic private and institutional as well as offshore capital chasing yield. There is a separate discussion that can be considered around risk.

Whilst the apartment market is slow from a pre sales perspective and we are witnessing and involved in a number of transactions with residual stock funding, the analogy maybe a bit like the titanic which takes a while to turn around but nevertheless is moving the right way.

There is more capital seeking to be deployed into the sector but we also haven’t seen too much deterioration of credit discipline which is positive. The major bank lenders are adjusting to the new paradigm which continues to evolve and have responded in varying degrees.

If our forecast is correct and this plays out as we think it may, base rate BBSY could very well look something this: 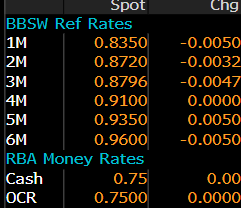 The following chart and table are a yearly rolling curve comparison and data table of fixed rates. 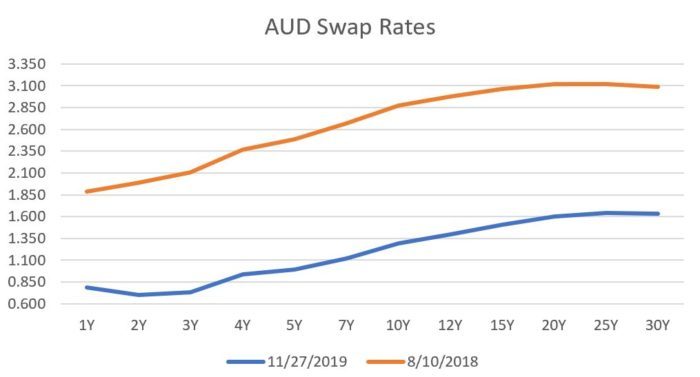 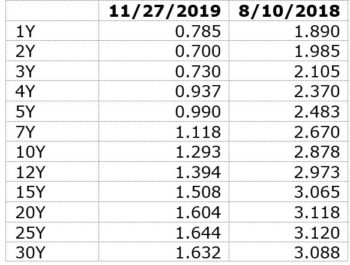 In summary, a fair proportion of the yield curve has inverted fixed rates with an expectation of further easing in monetary policy which we agree with.

Do be aware of funding and debt facilities which may have reference to negative interest rates. There is a potential risk of incurring more cost should a funder put a floor at zero in the debt facility and any corresponding hedges are in place. The two are mutually exclusive to each other but can compound borrowing costs if applicable.

We can assist with any of these risk management aspects which may transpire and cause borrowers greater angst.

AUTHORS DISCLAIMER: The person named as the writer of this report hereby certifies that the views expressed in the research report accurately reflect their personal views about the subject securities and issuers and other subject matters discussed. The above does not reflect financial advice nor purport advice and is a view expressed by the writer. The writer does not receive any commissions direct or indirect from any financial institution.