To say the world has changed since our past article would be an understatement. Clearly there is total media saturation on what has to be one of the globe’s worst health crisis in history and its ramifications on both human and economic functions.

In our last paper, we had communicated and forecast cash rates to .25% and an active RBA adopting modern monetary policy theory and deploying quantitative easing (QE). Both of these milestones have been met, and some.

Our view that rates will remain low for several years to come is unchanged, however, there are a few more digestible facts for us to consider which the central bank will and is considering with its forward looking lens.

When a business loses its right to function, to fulfil its legal obligations, no amount of JobKeeper subsidy is going to alter the fact livelihoods are at risk and the fabric on which our democratic society is built upon begins to fracture.

We feel that the transitional approach adopted by the federal government of weaning business from JobKeeper and replacing it with tax concessions, infrastructure spend and other incentives will produce a hole where the paradigm shift is mismatched and many businesses will collapse into the abyss. Publicly produced information also confirms fears that mental health and support groups such as Beyond Blue and Lifeline have seen marked increases of contact and requested support. We are very empathetic to anyone who may be feeling vulnerable at this time.

This leads us to the next phase of possible insolvencies and the real impact this has on individuals and business. Firstly, we wish to point out and clear up any misunderstandings:

The governor of the RBA, Philip Lowe commented last week about the¹ “shape of the recovery – that is the shadow cast by the very uneven nature of the recession that we have been living through. All recessions are uneven, but this one has been especially so. The government has wisely sought to even things out, but inevitably we are left with outcomes that are very uneven across the country. This unevenness is especially evident in the labour market”.

Governor Lowe, further went on to comment about the sectors and age groups of those most affected, which has been well identified in media commentary. This is further reinforcement of current conditions today and delivers what appears greater known downside to the economic recovery. It also supports the view of unevenness of sectors, business and individuals who may/will be affected. He has been quite clear and open around a forward sustainable and increasing inflation target of between 2%-3%, which will be some years away.

Governor Lowe, highlighted the possible benefit and effect of further monetary policy stimulus from here and it is our view that we are most likely to see a reduction initially to the official cash rate of .10% in November and a further decrease in the cash rate .05% in March 2021. This combined with additional quantitative easing and yield curve management should remove quantum volatility from the Australia rates market. The RBA Board has also adjusted its view on inflation from forecast inflation to actual inflation, thereby adding a further stabilizing metric to rates’ policy.

Notwithstanding, an increase of $A260bln of bonds to be issued by the treasury (AOFM), will challenge the RBA of how best to manage this significant issuance. Yield curve management will support lower five and ten year rates.

The chart below is a direct comparison of swap rates from October 2019 to present. Clearly there has been a contraction in rates and we would further expect some reducing of swap/fixed rates as the RBA make adjustments. We have already witnessed curve flattening with 10 year swap rates reducing in yield when compared to 3 year swap rates. 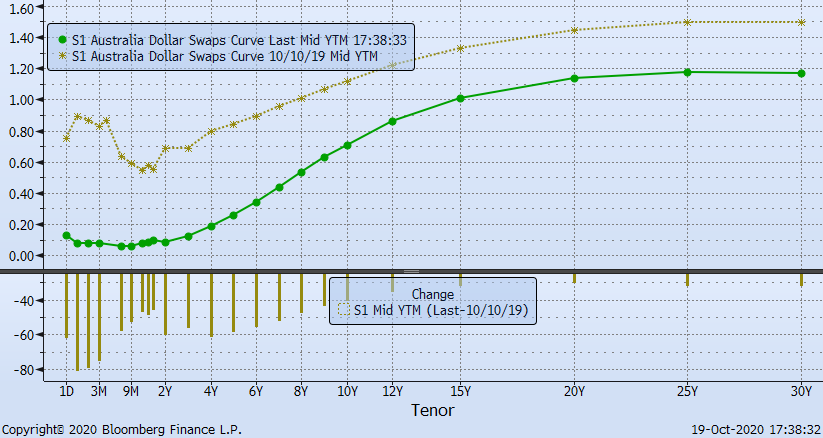 The RBA’s Term Funding Facility (TFF – 3 year term facility at a rate of .25%), was recently expanded by $57 billion to around $200 billion. It is expected that much of this extra funding will be drawn upon in time, for the simple reason that it will be profitable for banks to do so. When this happens a new, long-lived asset will be added to the Reserve Bank’s balance sheet. The banks will use the funds to write loans to businesses and households, buy securities, or repay debt, all of which will serve to lower interest rates in the economy and extend funding to the private and public sector.

Zero bound rates have been flagged by the RBA, an adjustment in the benchmark cash rate to 10 bpts has also been flagged. 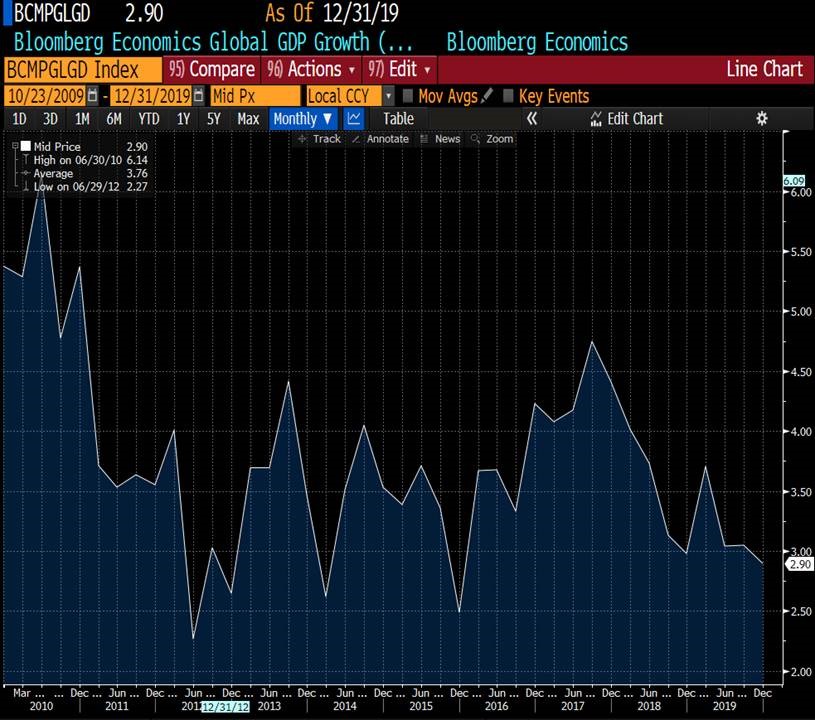 However, there is a staggering US$16.832 trillion dollars of negative yielding debt across the globe which may influence and portray a possibility of negative rates in Australia.

Of the ten EMEA countries, five are yielding negative rates in the ten year part of the yield curve. Have negative rates solved growth issues? We think not as yet.

Coupled with clear geo-political tensions with Australia’s largest trading partner, adds to the complexity and possibility of negative rates. This is in spite of the RBA’s best efforts to avoid going down this path. Perhaps the world is at the bottom of the growth cycle and will very slowly arrest a further slide in GDP. If not, we feel there is a very real possibility of negative longer term rates coming into play domestically.

Initiatives by governments around the world so far have not materialised in positive growth outcomes. 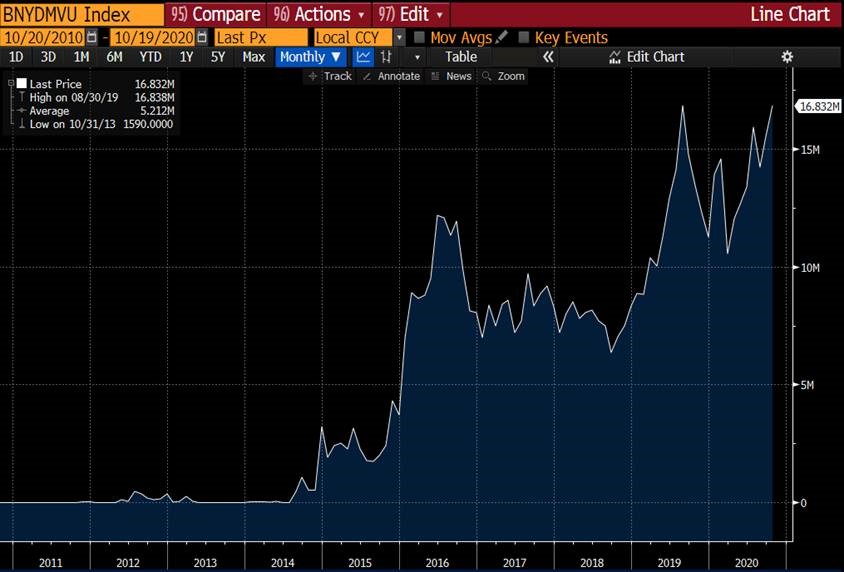 As a result of rates being so close to zero, it is nearly certain that debt facilities will have floors in documentation included. As mentioned in a past strategy paper, there are ways in which the potential additional costs of negative rates on debt facilities may be able to be managed.

We hope you all stay well and safe.

AUTHORS DISCLAIMER: The person named as the writer of this report hereby certifies that the views expressed in the research report accurately reflect their personal views about the subject securities and issuers and other subject matters discussed. The above does not reflect financial advice nor purport advice and is a view expressed by the writer. The writer does not receive any commissions direct or indirect from any financial institution.